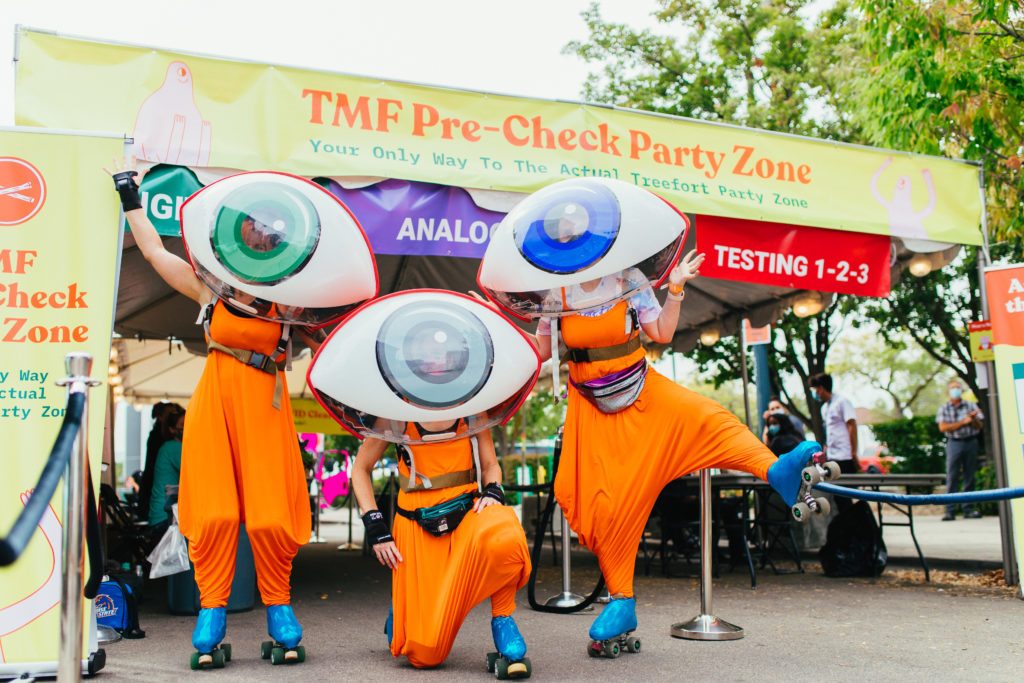 In the midst of dashing around Downtown Boise to catch sets from your favorite (and soon to be favorite) bands, you can fill your Treefort experience to the brim by exploring the various facets of what the Treefort community has to offer!

Here’s your sneak peek of what the forts are up to for Treefort 10. There really is something for everyone, and this is just the beginning! Dive in…

Bear witness to performers on a party bike (yep, those party bikes) as they explore a range of relationship scenarios that are both hilarious and heartbreaking. New characters reveal themselves as the bike travels around the city. In a world where Nick Drake replaces Drake, SAD BAR illustrates how a range of sadnesses can feel different when approached as a shared experience within the context of a typically party-centric setting.

Comedyfort is bringing the laughs with headliners Chanel Ali and Chris Garcia!

Chanel Ali is a standup comedian, writer, and actress living in NYC. She hosts the Food Network digital series Food Debate! and was a cast member on MTV’s Girl Code. In 2020, Chanel appeared on the CC Stand-Up/Refinery 29 series Taking the Stage and Speak Up.

Chris Garcia is a comedian, television writer, actor and podcaster from Los Angeles This fall, Chris’s WNYC podcast, Scattered, premiered which Uproxx called “one of the most touching, and funniest, narrative nonfiction podcasts of the year” and Time Magazine deemed “one of the top ten podcasts of 2019”. The limited series focuses on his Cuban exile family and the mystery of his father’s past (in a funny way).

Filmfort will feature We Intend to Cause Havoc, a film about the 21st Century formation of Zambia’s most popular rock band of the 1970s, W.I.T.C.H.

W.I.T.C.H. might sound familiar because they are also on this year’s music lineup PLUS members of the band will be doing a Q&A after the film screening!

The film documents the life of W.I.T.C.H.’s lead singer, Jagari, whose name is an Africanisation of Mick Jagger. Through the resurrection of a music that was forgotten by many and unheard by most, the film explores the life of a former African rockstar, and the excitement around the rediscovery of his music by a new generation of Western fans.

The ethnic diversity and rich musical traditions of New Orleans and the Louisiana bayous are the background for Oregon Shadow Theatre’s adaptation of the classic French fairytale. Antoine, the miller’s son, inherits Puss the remarkable talking cat. The two set out on a journey to impress the great King Calypso and the Princess, Sweet Emma. Soon Antoine is wrestling an alligator and Puss has to match wits with the shape changing Swamp Ogre. Colorful shadow puppets inspired by Mardi Gras’ outrageous parade costumes along with live Zydeco and Cajun music give spicy flavor to this production.

Storyfort will be buzzing during all five days of Treefort in various nooks around the city.

One of the featured panels at Treefort 10 will highlight the voices of immigrants and farmworkers and feature ethnic studies professor Dora Ramirez and immigrant rights activist Irene Ruiz.

That’s all for now! Buut, be sure to check back soon for more announcements and buy your Treefort pass now before it’s too late!