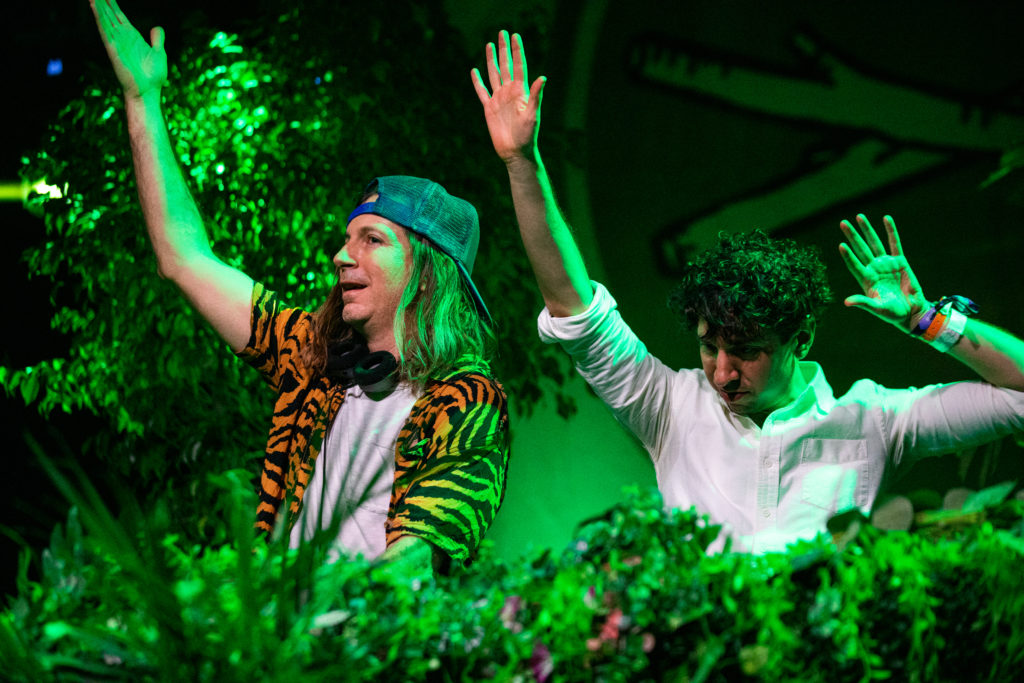 Do you remember Odesza‘s Treefort 2014 set? (p.s. do you also have their latest release ‘The Last Goodbye (feat. Bettye LaVette)‘ on repeat?) Did you get lost in the house bangers at J.Worra‘s Knit set during Treefort 2021? How hard did you groove with the last-minute Poolside feat. 2435 plants show on Main Stage back at the September Edition of Treefort? Remember when Dan Deacon got the whole crowd shakin’ at Main Stage in 2014?

If you answered yes to one or more of these questions, you’re gonna loooove these Treefort 10 artists!!

LISTEN TO THE PLAYLIST BUY YOUR PASS TREEFORT APP

With her distinctive blend of live piano loops, high-energy beats, and achingly beautiful melodies, producer, DJ, pianist, entrepreneur, and activist LP Giobbi has become one of electronic music’s fastest-rising stars. Considering herself “a one-woman jam band” behind the decks, the Oregon-born, Austin-based piano house queen has played to thousands of fans across the globe—performing on the stages of Coachella, EDC, Lollapalooza, Firefly, Outside Lands and ACL, and supporting such heavyweights as Galantis, SOFI TUKKER, Madeon, and Diplo.

Named a 2021 “Artist to Watch” by Spotify, Giobbi has racked up nearly 30 million cumulative streams from her singles and remixes, while hits like “Meet Again” ft. Little Boots, “Move Your Body” ft. Hermixalot, and “Close Your Eyes” ft. HANA have landed her on the covers of such high-profile playlists as Spotify’s Mint, Friday Cratediggers, and Housewerk; Apple Music’s Dance XL; Deezer’s New Dance; and Amazon Music’s Fresh Dance. As an in-demand producer, meanwhile, Giobbi has delivered official remixes for the likes of SOFI TUKKER, Dom Dolla, and Hayden James, as well as for such house legends as Junior Sanchez and MK.

Seattle-based artist, TeZaTalks, opens portals. She points a finger and colorful wave glimmers grows. Suddenly a window of song is stretched open. TeZaTalks sings a note and a universe blossoms like a pink-purple rainforest orchid. Each is a route to a new realm of expression, energies. Each is a lesson to absorb, to find yourself within again. To walk through with refreshed skin and a renewed heart. Her passion dwarfs nuclear fission. Her soul is elastic like lungs.

Regeneration is the name of her game. Shields are broken and must be mended. In this way, the personal traumas TeZaTalks has endured along the way have led directly to her millions of song streams. To date, TeZaTalks has played coveted sets for SoFar Sounds, KEXP’s in-studio series, Seattle’s Upstream and Capitol Hill Block Party festivals, and AfroPunk. She has been featured prominently by publications like EDM.com, American Songwriter Magazine, Trap Nation, and Xkito.

TeZaTalks, who has also played the famed Showbox stage in Seattle and has been featured on popular Spotify playlists, landed in the Pacific Northwest after leaving her hometown of Oahu. In the same way that she found the Emerald City through travel, so did she find her creative self through exploration. But identity can be tricky, paradoxical. The clearer we are to ourselves, the more complexity abounds. And this is the essence of the sonic interplay of TeZaTalks. The genre-bending artist will challenge you but only by breathing in you new life.

Goth Babe is Griff Washburn enjoying himself. Originally from Tennessee, Griff currently lives off the grid in his 1996 Ford F-250 with his pup Sadie, surfing up and down the coast of California and Oregon. He writes and records his music in the back of his camper off of solar power, while in the midst of following good weather and good people. After writing songs in his dorm room at age 18, Griff right off the bat knew that he wanted to make this goofy band name more than a side hustle. After touring in 2016 and living in NYC for part of 2017, Griff packed up his things and made way for the West Coast. He’s recently picked up on the brighter parts of life. Parting ways with social status and relevance, he’s discovered how wonderful living day by day is. Making music to Griff is less a climb to the top, as it is a form of free thinking and enjoyment.

Few artists are at once artful and savvy enough to transcend the endless scroll, but over the past 18 months, LA-based indie-pop duo Magdalena Bay have used social platforms to dispatch their music, and what you might call their philosophy, in hypnotic, ephemeral bursts. A long trip through their feeds produces music videos in miniature, irreverent pontifications on the state of the music industry delivered via home video VHS aesthetics, and existential meditations on everything from International Women’s Day to the clone craze of the early aughts to the indefinite lifespan of plants. To Mica Tenenbaum and Matt Lewin, reality can be unmade, manipulated beyond all recognition; their project is as much musical as it is an experiment in pop persona and visual aesthetics.

On October 8th, Magdalena Bay released their debut full-length LP, Mercurial World, via Luminelle. Entirely written, produced, recorded, mixed and mastered by the duo, Mercurial World proposes an abstract theory of time and explores the staggering “what ifs” that make up the human experience. Approaching reality as a construct allows Magdalena Bay to enact their own, one that is committed to nothing but expanding the possible. Even the album’s sequencing hints at the eternal: the first track is titled “The End,” the last is “The Beginning,” forming a perfect loop when you listen to it straight through. “Matt, Matt, wake up!” Tenenbaum whispers on the introductory track. “I was thinking about how there’s no true end to anything/ Everything comes from and goes to the same place: NOWHERE.”

Ata Kak’s cassette Obaa Sima fell on deaf ears when it was self-released in Ghana and Canada in 1994. The music on the recording—an amalgam of highlife, Twi-language rap, funk and disco—is presented with the passion of a Prince record and the DIY-bedroom-recording lo-fi charm of early Chicago house music.

It’s easy to be angry in moments like now. And that’s OK. But it takes courage to turn that anger into productive energy. The previous Sinkane album, 2017’s Life and Livin’ It, was released at a very crazy time: things like the Muslim ban, police shooting unarmed people of color, massive corruption in my native Sudan, fake news, Donald Trump, Brexit and so many other calamities all really forced me to think about my place in the world as a musician. I began to think about how I could use my music in a constructive way — not only to help myself but to help others who feel frustrated and powerless.

A woman needs a room of her own if she is to realize her creative potential. Singer/Songwriter, Claudine Magbag joins a long line of female voices re-imagining the intimate as universal. With her soft and intimate vocals, enthralling lyrics and melodies, Magbag creates her own company while giving shape to the vivid interiority of life as a young 20-year-old. The yearning to start while still bearing the uncertain weight of the present.

Yak Attack is a live electronica power trio from Portland Oregon. Founded in 2013, the band has experienced steady growth over the past few years and has been building buzz by touring frequently throughout the Pacific Northwest, California, and the Mountain West. The group’s music is best described as “organic electronica”, using skillful playing, live loops, and tightly constructed songs combined with raw improvisation to build high-energy and uplifting dance music from scratch, where every note is played and recorded live. The band draws on influences from a wide spectrum of electronica, such as house, drum and bass, and breakbeat, along with elements of jam, funk, and jazz. The result is a live show that is musically sophisticated but widely accessible, with a diverse and engaged fanbase that travels to out of town shows and continually returns to see what the band will do in its next live show.

A highly articulate craftsman in all aspects of his work, Madison makes honest dance music for the eager listener, holding nothing back. In 2020, Madison caught the attention of deadmau5, and soon thereafter found his rightful home at mau5trap. Early releases including his debut mau5trap single “Indigo” and subsequent Some Nights EP garnered high praise, paving the way for Madison’s debut LP, Living the Phantasm (April 2021). Born in a time of uncertainty, Madison’s Living the Phantasm is a testament to perseverance, and serves as the culmination of every musical influence that has defined his artistic life.

The new duo of electro-acoustic disciple, Zachary James Watkins and analog-spacesynth master, Ross Peacock conjures a new possibility of tone, rhythm and light. Influenced by the likes of Dub, Krautrock and experimental pioneers Cluster, Brian Eno and Scientist, their live improvised blend of psychedelic electronica embraces the fragility of analog and digital hardware systems. Watkins/Peacock engage in vibrant patterns over time with an investment in exploration and exchanges.

Watkins has recently returned from Carnegie Hall, where Kronos Quartet performed his original composition “Peace Be Till.” In 2017, he composed and performed an hour long score for the 35mm film “Black Field,” collaborating with acclaimed filmmaker, Paul Clipson. His duo, Black Spirituals, has released records on SIGE/Tapeworm and toured Europe extensively including a six week stint with Earth. They have since received glowing reviews from the likes of The New York Times and The Wire.