Her work has appeared in Midwestern Gothic, Mid-American Review, Bombay Gin, and many other journals. In addition to teaching creative writing and composition as an assistant professor at the College of Western Idaho, Catherine is pursuing an MFA in Poetry through New England College. She is the author of seven collections, most recently Shelter in Place, published this fall by Spuyten Duyvil.

Storyfort got to talk to Catherine about her newest work and her many sources of inspiration.

What was the genesis of Shelter in Place? Did it start with a certain foundational poem or an overarching concept? Were there things you learned from assembling past collections that shaped your approach this time around?

The aesthetic of the book began to build through songs and images before it was able to come out as poems. In the spring of last year, I was feeling the need to write, but things were extremely busy, so it was difficult to give it time. Instead, I began brainstorming by gathering songs on Spotify and images on Pinterest that in some way reflected the mood I was going for. Doing this allowed me to better explore that atmosphere and sort of “worldbuild” – a term I don’t usually hear applied to poetry, but one that comes up a lot for me. Setting felt essential to this book, and establishing that served as a form of prewriting to the poems. The first poem in the book is the first one I wrote – my hope is that it sets the scene and invites readers into this decadent but decaying city that works as a backdrop for the rest of the collection.

Thematically, the book is inspired by the ongoing tension I feel between fear and hope about the future. Not just my future, but the future of people I care about, and our shared, planetary future. The poems touch on anxieties surrounding economics, environmental sustainability, and quality of life in general, and these are all things I was thinking a lot about last spring. This was somewhat of a departure from past collections: prior writing looked at smaller, more individual emotions, and this one is more outward-facing. It’s examining things on a larger scale. That said, a lot of the poems still center on quiet, intimate moments.

The poems in this collection are such a smart and powerful exploration of this time. Are there particular challenges – and liberations – that come with focusing on this kind of timely material? Did you delve into it knowing it would result in a collection that is “equal parts elegy and protest song”?

I knew last spring that I was feeling very dismayed at the state of the world. I was reading about families being separated at the border, people rationing their insulin, mass shootings, species loss, climate change – all kinds of stories of suffering. I was reminded of those heartbreaking lines by Warsan Shire that circulated widely a few years ago. She describes touching an atlas and asking the world, “where does it hurt?” The world in turn answers, “everywhere / everywhere / everywhere.” This is how it feels sometimes – like there is so much pain, it’s hard to know where to begin, even if you really want to help.

The poems in this collection are my attempt to grapple with those feelings of grief and frustration, I think. In the end, perhaps they don’t come to solid conclusions, but they do seek to be open, present, aware, and attentive, and in showing early drafts to friends and talking about them, I found lots of causes for hope, too. There is resistance and resilience, even if there’s a lot of pain as well.

In short, I think the biggest challenge in writing about things like this – systemic, longstanding sources of suffering – is making room for both sorrow and determination. It was challenging to face my own powerlessness in the grand scheme of things, but it was also comforting to know that other people are thinking about these issues and to be reminded that individual actions can add up to sweeping change. I didn’t want to shy away from the immensity of some of the problems the book touches on, but I didn’t want to succumb to despair either. I do think there’s hope, and I hope (ha!) the poems reflect that.

Are there certain writers you turned to for inspiration while working on this book?

Books by Emily Corwin, Kailey Tedesco, Christine Sloan Stoddard, and Lisa Marie Basile, which I read in the months leading up to beginning the collection, influenced me for sure. These are all writers who blend surrealism and fabulism with deep, emotional subjects. To me, they all also situate agency as an alchemical, almost magical force. It’s when speakers step into themselves fully and without reservation that things heat up in their work, and I admire that a lot. How much power individuals have and how they exercise that power are questions central to Shelter in Place, so that theme of agency-as-sorcery stood out to me and inspired me greatly.

What’s been your biggest breakthrough as a writer – either in terms of a particular piece, or your overall approach? In what ways has your writing changed over time? What has remained consistent? 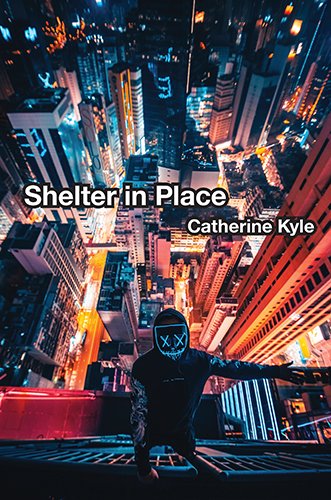 One of my biggest breakthroughs has been that poetry is this absolutely wild, unpredictable genre. It can be anything we want. I recently read a quote by Fady Joudah: “To reimagine a language of one’s age is perhaps poetry’s essential task.” And I believe this is true. I think every poet is trying to find language to describe the world on their own terms, along with their place in that world. Far from being the cutesy “roses are red, violets are blue” stereotype some people have in their minds, poetry is limitless. It can be about anything from snails to cosmology and can push the boundaries of language in astounding ways. I’m constantly surprised by poetry – I always feel like I am discovering it anew – and I love that about it.

Going along with that, the realization I’ve gradually come to about my own writing is that poetry can accommodate my weird, kind of fantastical, sometimes even sci-fi leanings. In August, I led an Idaho Writers Guild workshop called “Fantasy and Poetry” at the Library! at Collister where we looked at poems that allow speakers to time travel, meet historical figures, hang out with superheroes, transform into animals and nebulas, and more, all to profoundly emotional ends. It took me a while to realize that poetry welcomed this kind of thing – that it didn’t have to be grounded in the literal, realistic world – and once I embraced that, it made me feel freer to make those kinds of moves in my own poems.

My writing has always been informed by my love of fairy tales and other genres that buck the confines of reality, but I’m beginning to lean into it even more. I think Shelter in Place illustrates that – it’s got a dystopian vibe and has supernatural elements in places. Like, in one poem, a beast pops out of a portal and talks with people about avocado toast. I love that stuff.

Years ago, I took a workshop with Amy Leigh Morgan (on fairy tales, in fact), and she told us to ask ourselves about everything we wrote, “Is this cool? Is it satisfying? To you?” Her point was that if you are enthused about something, it will likely show in your writing. Also, if your writing isn’t cool or satisfying by your own standards, you’re probably not taking much joy in it. I like this advice a lot. I’ve carried it with me ever since.
Other, more recent advice has come from the mentors I’ve worked with in my MFA program so far. Allison Titus reminded me how essential it is to be gentle with writing – to let it work at its own pace and in its own mysterious ways rather than demanding something from it. Sarah Manguso reminded me that taking time to make art is a powerful, sometimes rebellious act, and that even when it’s hard, it is always worth doing. Right now, I’m working with Paige Ackerson-Kiely, and she’s reiterating how important it is to remain honest and true to yourself in your writing.

Has working with students impacted your own approach to writing in any way?

Yes. I’m incredibly grateful to work with students, and they always amaze me with their depth, courage, and originality. Teaching creative writing reminds me that art is here in part to encompass, absorb, and hold space for the full range of human emotion. We can bring to art our bleakest feelings and our most joyous ones. Art can take it.
There’s a line from David Small’s memoir Stitches where he says, “Art became my home,” and I think many people can relate to that. Art is a home to me, and when I see students for whom art is becoming a home as well, I want to bring them my best. I want to deepen and push my own writing so that I can help create the kind of classrooms where others feel safe and confident doing that as well. Not a day goes by I’m not in awe of my students.

Can you tell us anything about your next projects?

Ghosts and angels that work in unusual ways have been showing in my writing a lot lately. Last fall, I wrote a series of poems about ghosts who were haunted by other, “deader” ghosts. It spoke to the layering of trauma and how messy, nonlinear, and counterintuitive healing can be. Since February, I’ve written several poems about guardian angels who are in charge of unexpected things: Raynaud’s syndrome, disassociation, lost species. I’m not sure if these are two separate projects or one big one, but I workshopped a draft of a manuscript that included pieces of both in a class offered through The Cabin led by Kerri Webster, and people gave me immensely generous and insightful feedback, so I’m continuing to work on that.

Also, I just read Fiolet & Wing: An Anthology of Domestic Fabulist Poetry, and I’m fired up about the genre of “domestic fabulism” – basically anything magical that happens within a domestic space or that addresses domesticity.