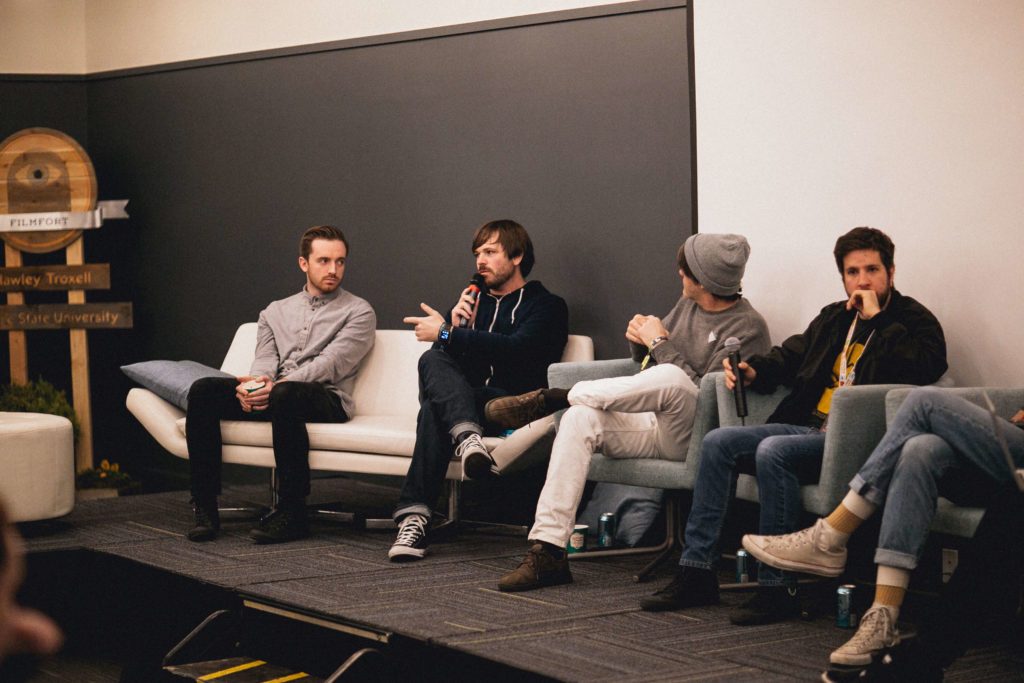 We’re excited to present to you another round of music industry panelists at Treefort Music Fest!

This year, you’ll be able to learn the ins and outs of music supervision from the people who’ve selected music for Quentin Tarantino’s films, Glee, Eat Pray Love, CSI: Miami, various PlayStation games, as well as trailers for The Martian, Frozen, Deadpool, The Avengers, Wreck It Ralph, and The Dark Knight.

You will also be hearing from music industry virtuosos on the state of the industry and the future of music discovery from the renowned Pacific Northwest record label Kill Rock Stars, Pandora’s Next Big Sound, influential blog Gorilla vs. Bear, KEXP, Terrorbird Media, and more.

Panels are free and open to the public! Be sure to check out these awesome, insightful panels:

Friday, March 24th 3:00-4:30 @ JUMP’s Inspire Studio
Five veteran music supervisors will dig deep into the mysterious world of their craft. With collective experience in film, trailers, video games, and TV, the panelists will discuss the role of a music supervisor, how songs get selected for big opportunities, what artists can do to get their music played, and answer audience questions.
Moderator:

Saturday, March 25th 12:00-12:50 @ JUMP’s Inspire Studio
During this listening session, our panel of music supervisors will give attendees a first hand look into their creative process. Before the panel begins, Treefort Music Fest artists will submit songs based on briefs created by the supervisors for projects they’ve worked on. Then, the panelists will review the songs on the spot and explain why a submitted song may or may not work. Attendees will leave this panel with a greater understanding of the music supervision process and factors that make a song a good candidate for licensing.
Moderator:

INDEPENDENT MUSIC IN 2017: STATE OF THE INDUSTRY – THE FUTURE OF WHAT PODCAST RECORDING

Sunday, March 26th 12:00-1:00 @ the Owyhee
The Future of What is a podcast about the music business. Hosted by Portia Sabin, president of venerable indie label Kill Rock Stars, this panel will talk to music industry insiders from radio, licensing, labels, and more about how the music business has changed significantly, even in the last few years, and how independent artists are finding a way to make their livings in the new economy.
Moderator:

THE FUTURE OF MUSIC DISCOVERY

Sunday, March 26th 1:30-2:30 @ the Owyhee
Discovering new music has never been easier for fans. At the forefront of the ever-changing music curation landscape, our panelists will tell you where discovery is heading and how artists can find new fans by aligning themselves with the discovery trends.
Moderator:

Toddrick Spalding is the Director of Music at Mob Scene, overseeing the agency’s music department and leading music creative for Theatrical. Over the course of his decade-plus career, he has worked on campaigns as varied as The Accountant, Fantastic Beasts and Where To Find Them, Collateral Beauty, Deadpool, The Martian, American Sniper, Big Hero 6, Guardians of the Galaxy, The Hobbit: The Desolation of Smaug, Captain America: The Winter Soldier, Frozen, August: Osage County, The Hunger Games: Catching Fire, Django Unchained, Cars 2, Tangled, and Toy Story 3. In addition to his work in trailers, Toddrick has music supervised several independent feature films and worked on ad campaigns for ChangeTheMascot.org, Haagen-Dazs, Levi’s, Labeyrie, and the NBA.

Mary Ramos is Quentin Tarantino’s Music Supervisor. She has worked on over 100 films and television shows in the past 20 years, working with directors on score and songs. Clients include directors Tom McCarthy (“Spotlight”), Zach Braff (“Wish I Was Here”), Robert Rodriguez (“From Dusk Til Dawn”). Ramos is currently working on Netflix film “DEATH NOTE” and Sony film “MARSHALL.” 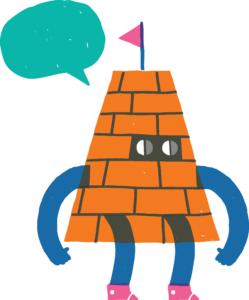 Alex Hackford oversees creative music affairs for Sony Playstation America. He’s working on Gran Turismo, MLB: The Show franchise, God of War franchise, The Last of Us, Hohokum, SoundShapes, and a number of other first party Playstation games. Hackford also helps with all the advertisements for Playstation hardware and brand.

Upon choosing to forego a career in engineering to pursue her dream of working in music, Heather Guibert fled the Florida sunshine for the bright lights of Hollywood. A graduate of the University of Southern California‘s Music Industry program, Heather spent nine years as part of the team of Music Supervisors at Neophonic, Inc., where she had the pleasure to work on such diverse television projects as Glee (Fox), CSI: Miami (CBS), American Horror Story (FX), The Americans (FX), United States of Tara (Showtime) and films including Eat Pray Love (Sony Pictures) and The Normal Heart (HBO). Since embarking out on her own, Heather has music supervised television shows such as Witches of East End (Lifetime), Stitchers (Freeform), and the Fox hit series, Rosewood. She is a proud member of the Guild of Music Supervisors and Television Academy.

Danny Exum is a music supervisor, music producer and the Director of Music at Workshop Creative. He got his start in the music industry as a DJ and live mix engineer at the esteemed 88.9 WERS in Boston, before bolting westward to work in EMI’s Film/TV department. Since those days he has built a strong career as a Music Supervisor for features, television and theatrical marketing. His credits include film marketing campaigns for Kubo And The Two Strings, Before I Fall, Wilson, Edge Of Tomorrow, Lone Survivor, The Avengers, Wreck It Ralph, Watchmen, The Dark Knight, and X Men: Days Of Future Past among others, as well as the independent films Come Down Molly, The List, and The Ballad of Genesis and Lady Jaye. He has been nominated three times for a Guild of Music Supervisors award for Best Use Of Music in a film trailer.

Dr. Portia Sabin is a cultural anthropologist. While working on her Ph.D. at Columbia University, she played drums, recorded, and toured with NYC band The Hissyfits. She founded Shotclock Management in 2004 and took over running the legendary punk record label, Kill Rock Stars, in 2006. She is the host of a radio show and podcast about the music business called The Future of What. Sabin is a board member of the Pacific Northwest Chapter of The Recording Academy, chair of the board of the Rock ’n’ Roll Camp for Girls in Portland, and former chair of the board of the American Association of Independent Music (A2IM). 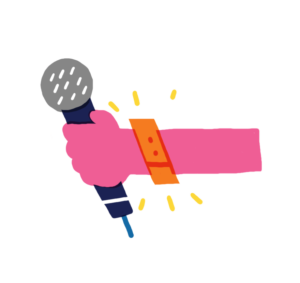 Jess Caragliano launched Terrorbird Media in the summer of 2006 with the relentless passion and blissful naivety of a college-radio obsessed 24-year old. Initially a 2-person radio promotion firm, Jess carved out a niche for Terrorbird as the only prehistoric flightless bird in the music marketing world. Within the first few years, Jess expanded Terrorbird’s offerings beyond radio to include publicity, sync licensing, and publishing, currently with offices in Brooklyn, Los Angeles, and Sacramento. Always staying true to Terrorbird’s independently owned and operated roots, Jess prioritizes #positivevibes and encourages a truly supportive work environment where each team member has the opportunity to curate their department’s roster with artists and labels they love and communities that inspire them. Proud to identify as a queer woman business-owner, Jess strives to make sure Terrorbird is an inclusive environment.

Lauren Ross grew up on a river in Virginia, playing woodwinds, brass, guitar – whatever else she could get her hands on. After graduating from Berklee College of Music, she moved to the drizzly hippie/punk town of Olympia, WA. She spent several years working at Kill Rock Stars there followed by then New York, while also managing St. Vincent and assistant-managing Laura Veirs and Thao With The Get Down Stay Down. Having started the in-house sync licensing department at KRS, she eventually migrated to Terrorbird Media, establishing their sync licensing department in 2009. She founded Terrorbird Publishing the following year, and is proud to represent many of her favorite labels and artists. She currently resides in LA, living the Terrorbird dream and playing music in her garage.

After graduating Magna Cum Laude from the University of Georgia’s Grady College of Journalism, Michelle King began her music career in 2009 as a publicist at Team Clermont in Athens, GA. In 2013, she partnered with Graveface Records to create Noisy Ghost PR with the intention of both providing in-house publicity to Graveface artists such as Xiu Xiu, The Appleseed Cast, Creepoid, and many more, as well as independent and indie label artists of all genres outside the Graveface roster. King spent the early years of Noisy Ghost in Savannah, GA working in the Graveface offices, and relocated to Austin, TX in 2015 where they currently operate out of their office in the E 6th St business district.

Chris Cantalini is the founder of Gorilla vs. Bear and host of Blog Radio on SiriusXM.

Karl Hofstetter founded Joyful Noise Recordings as a freshman in college, by making up a fake label name with the solitary goal of creating a false sense of legitimacy for his band’s CD. Since this “first release” in 2003 the label has grown a diverse roster including Kishi Bashi, WHY?, Sebadoh, Surfer Blood, Joan Of Arc, Big Business and many others. JNR has been on the forefront of innovative vinyl and physical product curation, including releases like a “12-sided record”, vinyl/CD hybrids, and playable etched records. With this experimental approach to physical media, the label has been able to work with artists such as David Yow, Dinosaur Jr., Deerhoof, Sufjan Stevens, Daniel Johnston, Built To Spill, and Karl’s unabashedly favorite band, the Melvins. Headquartered in Indianapolis, Indiana, the label now has a staff of 10 likeminded people. JNR strives to navigate this volatile industry with heart and purpose by working with artistically-honest musicians to create adventurous releases.

Britnee Foreman is an Account Manager and in charge of Client Experience at Next Big Sound. She uses her business degree in marketing from Baylor University and extensive customer service background to help advocate for musicians in the industry and empower them to use data to advance their careers. Her past work includes stints at SPIN magazine, Universal Motown Records, Virgin, a handful of artist management firms, and an occasional turn as a band manager or sound engineer.

Zeke Howard has spent over a decade at the intersection of music and tech as a Partner at The Brigade, a design agency working with startups and organizations including Spotify, Global Citizen and Mozilla. He founded Trailboss Management to help artists develop sustainable careers representing Mimicking Birds and Nick Delffs. He got his start in the music industry at Sub Pop, both at the label and as the drummer of Love as Laughter. 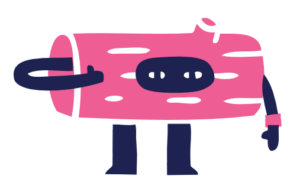 Sharlese Metcalf began her radio career at Green River Community College in 2001 hosting their Northwest music focused show Local Motion on KGRG. She attained her Broadcasting Certificate from Green River, and was offered a job at Jones Radio Networks. There, she worked on Classic Country and Top 40 shows as a production assistant. While at Jones Radio, she was given a KEXP internship to work on the Northwest music show Audioasis as an assistant to the host and booker. In 2009, She became an Audioasis producer, and in 2012, was promoted to host. Sharlese additionally works as DJ, promotes events at clubs around town as False Prophet, is a member of the collective TUF and recently was appointed to the City of Seattle Music Commission.

If you want to catch all the action this Treefort, be sure to buy your 5-day pass now online or at the Record Exchange. Prices go up on March 1st!